[2015] On Inertia and Stiffness Effects During Impact Docking 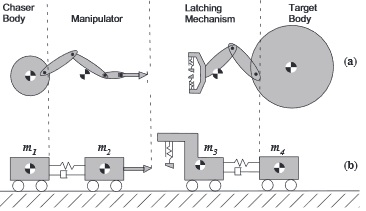 Space debris removal and mitigation using space robots are complex missions, which require extensive analysis prior to launch. An important aspect during such a mission is the capturing task; any unsuccessful attempt may create more problems than solve. In this paper, the modelling of the impact docking between two multibody systems is studied. The effects of mass ratios on the resulting changes of relative velocities are analysed and discussed. An extension of the rigid body impact theory to multibody systems is developed, where the effect of system mass ratios to the change of the relative velocities is quantified, and its significance is discussed. Velocity requirements leading to a successful latching at first impact will be identified. Simulation results are presented that validate the proposed analytical approach. Future work is discussed.