Analysis, Dynamics and Control of Robotic System for Docking to Orbital Space Systems 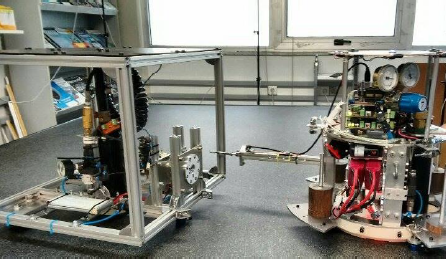 Space exploration and exploitation requires the simultaneous coexistence of people and machines. The human need for more information has made the use of satellites important. The need of satellites that can perform for longer time becomes increasingly evident. Furthermore, due to the fact that extravehicular activities (EVA) contain risks for the astronauts, it is crucial that these activities be substituted by robots. From all the above, On – Orbit Servicing (OOS) from robots is crucial. The concept of repair of satellites on orbit by robots brings in the concepts of docking/berthing and of proper control of a manipulator so that the latching be successful every time, and thus avoid accidents. In the context of this work, various models were created in order to understand how each parameter of the elements involved affect the success of the docking especially when the robot and the satellite have comparable masses. Furthermore, a robot with a manipulator under the influence of an external force at its end effector was modelled, in order to study a case of docking. Moreover, for each model, an impedance controller was created and the proper selection of impedance parameters for a desired response of the manipulator was studied. Finally, a reaction wheel was modelled, designed and manufactured to rotate the robot without fuel consumption and without creating disturbances due to the use of thrusters to the target of the docking. Also, a first CAD design of the capture mechanisms is presented that can be used to run future experiments so that the validity of the theory proposed is evaluated. Parts of this work were presented in two conferences, ‘13th Symposium on Advanced Space Technologies in Robotics and Automation ASTRA 2015’, that was held in the Netherlands and the second one at the ‘24th Mediterranean Conference on Control and Automation’ that was held in Athens, Greece in 2016.